The Manor of Flintham dates back to the C10 and by the late C13 it was owned by Sir John de Hose (Throsby 1790). His descendants, the Hoses, then the Husseys, owned Flintham until it was purchased by Richard Hacker in the C17. Flyntham is marked on Speed's map of 1610. Flintham Wood (outside the boundary of the site here described), a steep bank planted with trees on the south bank of the River Trent which was a well-known landmark to travellers from Newark to Nottingham, was described by Bishop Corbert in 1620 (Firth 1924). It was probably Richard Hacker or his son who remodelled the medieval house which passed eventually to his great grand-daughter who married into the Disney family (CL 1979). The Disneys had improved the setting of the house in c 1777 (ibid) prior to its purchase in 1789 by Colonel Thomas Thoroton (1753-1813), the great nephew of Dr Robert Thoroton of Screveton, the antiquarian. He bought Flintham Hall as 'it gave scope for landscaping and planting that was absent at Screveton' (ibid).

In 1798 the house was rebuilt in the Georgian style. The walled garden was also built c 1798. The Colonel's son, Colonel Thoroton Hildyard (1787-1830; the name Hildyard was assumed upon his marriage to the heiress of Sir Robert D'Arcy Hildyard) called in Lewis Wyatt who extended the stables in c 1820 and in 1829 began additions to the house. Only the library was completed when Colonel Thoroton died in 1830 aged forty-three. Wyatt's plans included those for a conservatory (ibid). The park also dates from the early C19 (Pevsner and Williamson 1979). In 1853, Thomas Blackborne Thoroton Hildyard, the son of Colonel Hildyard, commissioned Thomas C Hine of Nottingham to encase the Hall in stone and build the tower, turret, and conservatory. The lake was put in at this time and the lime avenue planted (guide leaflet). Judge Gerard Moresby Thoroton Hildyard, the grandson of T B T Hildyard, inherited Flintham in 1928. He made various alterations to the gardens as did the subsequent owner, who inherited in 1956. The site remains (1999) in private ownership. 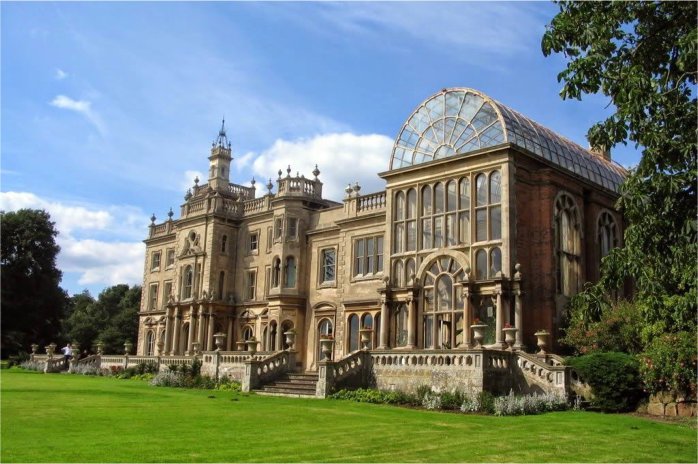 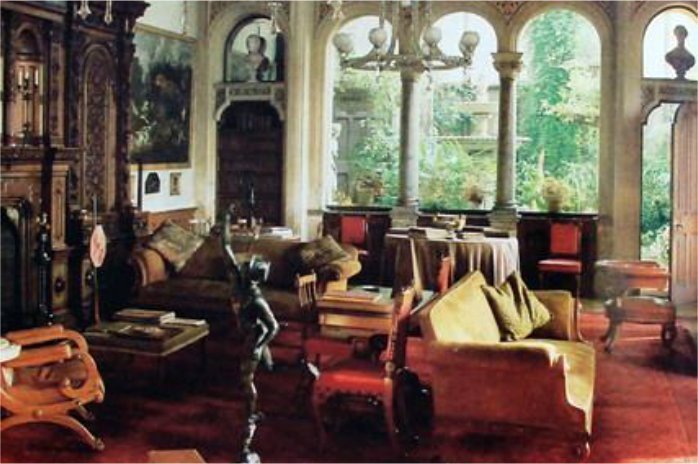 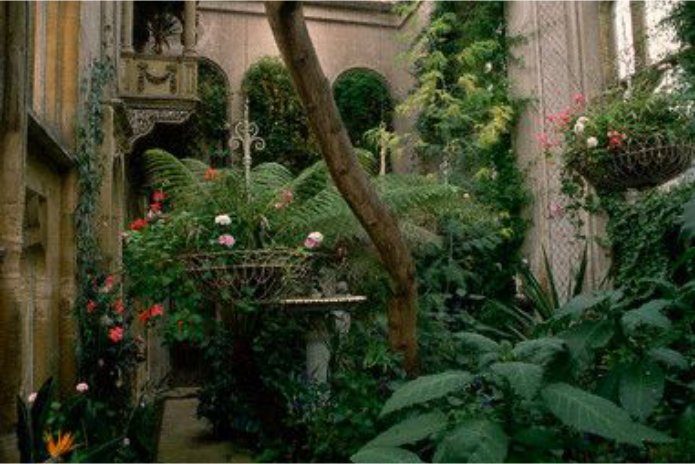 Flintham Hall (listed grade I) in its present form is as remodelled by T C Hine for T B T Hildyard in 1853/7 in an Italianate style, encasing earlier buildings on three sides and built of brick, partly rendered, and ashlar with hipped and gabled roofs. The Hall is on the site of an older medieval and Jacobean house which was rebuilt in 1798, and faced in 1853/7 in Ancaster stone. The west front has a porte-coch¿re under a square tower. The west end of the south front comprises three storeys, while to the east of a projecting central bay is the two-storey library designed by Lewis Wyatt (c 1777-1853) in 1829. It is linked to a later barrel-shaped conservatory the full height of the Hall, 'no doubt inspired by the recent Crystal Palace' (Pevsner and Williamson 1979). The east front, a two-storey service wing of c 1798 which incorporated part of the C17 house, has an off-centre late C20 Doric portico which now (1999) faces a blank wall which is the western boundary of the churchyard. The north front, c 1798 with mid C19 embellishments, abuts part of the service wing and faces the stable yard.

The stables (listed grade II) lie immediately north-east of the Hall and were designed by Wyatt in the 1820s. Built of brick, they have hipped and gabled slate roofs. The stables comprise a west range, a north-east range, and a shorter east range.

The walled kitchen garden was constructed at the time of the major alterations and rebuilding in c 1798. It is situated 60m south-east of the Hall and is entered from the south front garden. It has heated brick walls (listed grade II) and is now (1999) divided into two sections. The north part includes the vinery and is planted with vegetables, flowers, and fruit trees and the south part is planted as a wilderness shrub garden. In the north part of the garden fruit trees have been planted on the north wall, adjoining the vinery (c 1790), part of which has been converted (late C20) into a swimming pool. A path leads south between low box hedges filled with flowers and shrubs, along the central axis to a sundial (1772, listed grade II). The two-bay, two-storey, brick-built Garden House (c 1798, listed grade II) abuts the exterior of the north-east corner, in front of which there are more vegetable beds. The centre of the garden has espaliered fruit trees surrounding large vegetable beds. Four busts of deities on ornate plinths placed in pairs against the north side of the central dividing wall are probably French and came from Ossington Hall (guide leaflet).

The southern half of the walled garden, now (1999) known as the wilderness or sculpture garden, was made into a shrub garden in the late 1970s. To the south-west of the middle wall is an old glasshouse reused as a pergola. On the exterior of the south wall are pheasantries or aviaries (Wyatt c 1829, listed grade II) built of brick with hipped slate roofs. The aviaries have a two-storey central canted bay with single-storey wings ending in square pavilions.

This website uses cookies to improve your experience while you navigate through the website. Out of these, the cookies that are categorized as necessary are stored on your browser as they are essential for the working of basic functionalities of the website. We also use third-party cookies that help us analyze and understand how you use this website. These cookies will be stored in your browser only with your consent. You also have the option to opt-out of these cookies. But opting out of some of these cookies may affect your browsing experience.
Necessary Always Enabled
Necessary cookies are absolutely essential for the website to function properly. This category only includes cookies that ensures basic functionalities and security features of the website. These cookies do not store any personal information.
Non-necessary
Any cookies that may not be particularly necessary for the website to function and is used specifically to collect user personal data via analytics, ads, other embedded contents are termed as non-necessary cookies. It is mandatory to procure user consent prior to running these cookies on your website.
SAVE & ACCEPT